Parking is a premium in Downtown Rocky Mount.  To attract downtown investors city officials have made promises and have even entered into contracts regarding parking.  Many of these promises and legal contracts center around the Tarboro St parking, that is now being explored to make workforce housing.  We have assembled below the reporting by the Rocky Mount Telegram along with emails they obtained.  Also, assembled are copies of contracts, press releases, video links and other source material.

City of Rocky Mount questionable ethics issues discussed along with finances. Check It Out with Guest Lige Daughtridge. Video available on the WHIG-TV YouTube channel.

To the Taxpayers of Rocky Mount, NC...How much more are you willing to pay?

The proposed 2018-19 budget by the Rocky Mount City Manager includes a $5.8 million increase. That’s a 9.13% increase from the current budget! It also includes an additional 3.8% property tax rate increase... an 18% increase over a five year period.

The city of Rocky Mount approves New Market Tax Credit financing for the Event Center and the wellness center operated by OIC. 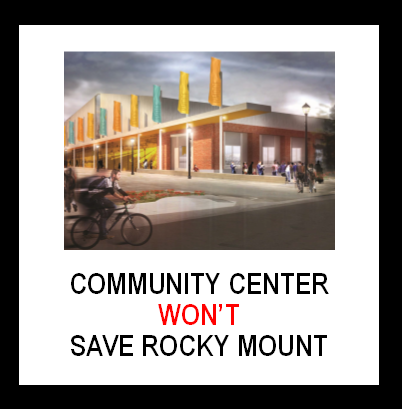 Julie Tisdale is city and county policy analyst for the John Locke Foundation. 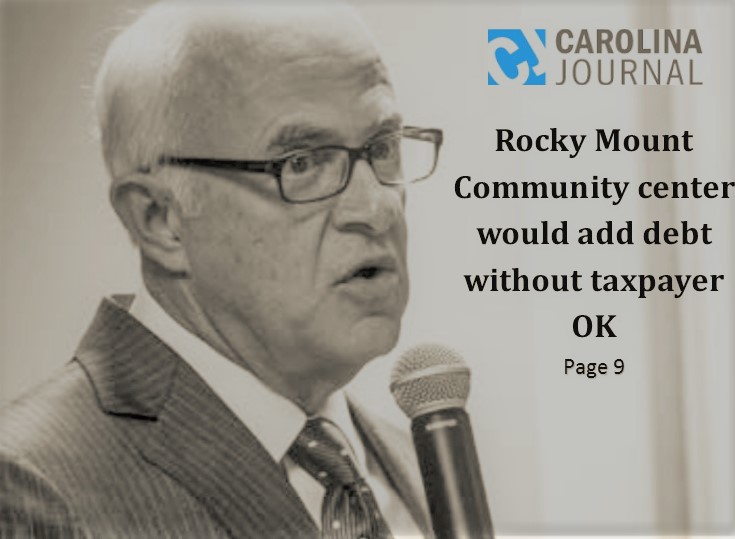 Rocky Mount Mayor David Combs, speaking to a Dec. 9 meeting of the Local Government Commission, defends the city’s proposed use of debt that would not require taxpayer approval to build a new community center.(CJ photo by Kari Travis)

Click on image to link to newspaper. Turn to pages 8 and 9.

Event Center - $2.5 million for land that’s only worth $1 million

The spending spree the City of Rocky Mount leaders have spent and propose to spend on the “proposed” Event Center is not sustainable.

According to City of Rocky Mount official the “proposed” Event Center will cost $32 million.  City Manager Charles Penny was quoted in April that the “the guaranteed maximum cost of the potential facility is $32 million. The city is looking to be approved for $15 million in new market tax credits before moving forward to the next stage that will include getting local government consent.”

So why is this project now costing taxpayers $39 million?  According to the Rocky Mount Telegram NC Senator Angela Bryant encouraged people to get involved regarding school funding by saying ““It’s not the county commissioners’ money, it’s your money.” Well we agree and hope she would say the same about The Rocky Mount City Council.””

We encourage you to attend the City of Rocky Mount City Council meeting to have your voices heard.  This meeting will be held Monday, August 8, 2016, 7 – 9pm in the City Council Chamber of City Hall.

Nash County property owners will see tax values of their property reduced between $10,000 to $15,000 for every $100,000 worth of property while those in Rocky Mount could experience losses between $20,000 and $25,000 per $100,000 in value. Anyone who has sold or purchased property in our area can confirm the tax values mimic the market values.

When will the Rocky Mount City Council and Manager pull their heads out of the sand?

When will the Rocky Mount City Council and Manager pull their heads out of the sand? Who in the world is going to come to Rocky Mount when a game is cancelled due to GUNSHOTS not weather?

How much has the City of Rocky Mount allowed residential customers to share in the savings due to the recent reduction in electric and natural gas rates?

It was interesting to read the Rocky Mount Telegram Editorial in support of the North Carolina bond referendum. This referendum will allow North Carolina taxpayers to vote, up or down, for a $2 billion general obligation bond for infrastructure.

The Rocky Mount City Council has voted.  The building of the Event Center which is now called the Downtown Community Center is apparent.  Thankfully, the City Council voted to have a local contractor design/build the Event Center.  At the  Monday - September 14, 2015 City Council meeting the construction duo of Barnhill/Holt Contractors will reveal preliminary design and layout to the public.

We remain disappointed this was not put to a referendum and remain doubtful this will meet projections.  The Community Council has pointed out areas of concern along with providing examples of failed projects.  While saying this we hope our concerns are wrong and this proves to be the catalyst that transforms Rocky Mount.

This leads us to Ralston, NE which is another example of an arena that is a drain to the taxpayers. Ralston is small but is located just outside of Omaha which sports a MSA population just shy of 1 million.  Ralston citizens were allowed to vote on this project which passed with 80% approval. Voters were told this would be so successful property taxes would be cut by 33%, construction debt would be serviced and the arena would generate a profit.  Instead the forecasted revenue is $1 million short and operations exceeded the forecast by $2 million.  Now Ralston citizens are faced with a property tax increase, funds diverted to cover debt and the potential of bankruptcy.

Sounds crazy but read the articles in the Omaha World-Herald. http://goo.gl/FFtneU

Here's to success and as the band R.E.M. sang about  here's to Shiny Happy People.  Buyer Beware! 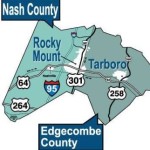 On Monday night, June 8th, the Rocky Mount City Council will consider  a new budget that includes increases to the property tax  in addition to water and sewer rates.  The property tax increase is to build the event center when it has not even been approved by the City Council or the NC Local Government Commission.

Click on the link to see the time and location of the City Council Meeting. http://goo.gl/wK3u5K

Edgecombe County side of the City of Rocky Mount

Here we try to breakdown the SFA presentation to be less confusing.

On February 23, 2015 the Rocky Mount City Council held an informational meeting regarding the "proposed" event center for citizens and property tax payers.

On February 23, 2015 the Rocky Mount City Council held an informational meeting regarding the "proposed" event center for citizens and property tax payers.

According to the City of Rocky Mount

Event Center - Get Involved and Let Your Voice Be Heard

EB-5 funding is back in the news.

Update from The Community Council

We want to take a few moments to update you on The Community Council and our plans regarding the “proposed” event center by the Rocky Mount City Council.

Charlotte has $22.8 million worth of reasons why Rocky Mount should not build an event center

The Charlotte City Council will vote to stick creditors with $22.8 million of debt owed for the NASCAR Hall of Fame.

Rocky Mount's option for funding the "proposed" event center.
What happens when you sell US citizenship for $500,000? The dark, disturbing world of EB-5 visas: http://bit.ly/1uirMtd 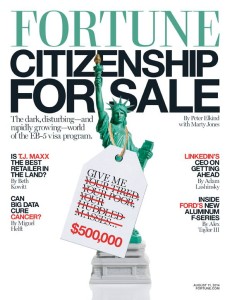 Update from the Community Council

This year The Community Council has been working and researching various topics which impact our community.

It appears Hickory, NC is in a similar position to Rocky Mount, NC.

How Rocky Mount stacks up to other North Carolina Municipalities

Over the past few months the Rocky Mount City Manager and Council have made some bold proposals that impact our community.

How much more can we handle?

According to the Rocky Mount Telegram we will likely see a 7% increase in our electric and gas bills while sewer charges will increase by 5%.

Is it Possible to Make the "Proposed" Event Center Profitable?

It comes to no surprise that the Rocky Mount City Council votes to proceed with securing funds (including, but not limited to EB-5 and New Market Tax Credits) for funding of the "proposed" event center.

Has the government cut the New Market Tax Credits by $5 billion?

This audio provides great insight into the mindset of the Rocky Mount City Council.

The Rocky Mount Telegram does not “believe an event center is in the best interests of this community at this time.”

On March 24th, the Rocky Mount City Council Committee of the Whole Meeting consisted of presentations by Davenport & Company, Bridget Chisholm with BWC Consulting and an attorney.

How will you pay for the Event Center? 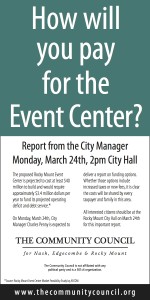 We encourage folks to read both the Rocky Mount Event Center Market Feasibility Study by AECOM and Frequently Asked Questions piece published by the City of Rocky Mount.

Wrong Time, Wrong Place, Maybe Wrong all the way Around?

The proposed Downtown Event Center should be a concern to every citizen in the City of Rocky Mount, Nash and Edgecombe Counties.